Get fresh music recommendations delivered to your inbox every Friday.
We've updated our Terms of Use. You can review the changes here.

Our Hearts As Thieves 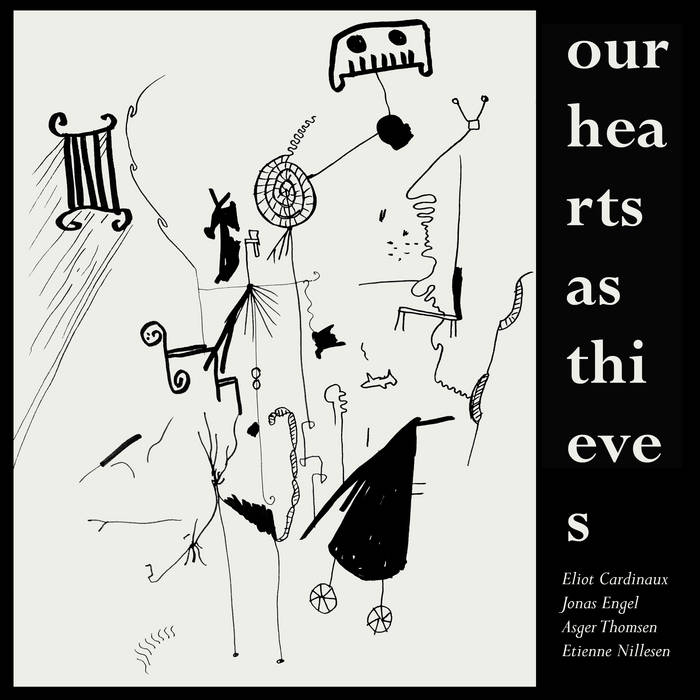 In September 2017 bass player Asger Thomsen invited Eliot Cardinaux to go on a tour in Europe to play with local musicisians in different cities. This album serves as documentation of a concert they did for a small crowd at Kunstwerk in Cologne featuring alto saxophonist Jonas Engel and drummer Etienne Nillesen who plays a particular extended snaredrum setup here. They didn't make a lot of decisions before playing, but there was an immediate connection between the four, finding common ground in an ambient-acoustic approach, embracing extended techniques and prepared sounds on their instruments while giving space to Eliot's voice which serves as a narrative anchor throughout the set. The music is abstract, dynamic, and expressive, filled with complex textures blending in and out of each other, sometimes making it hard to distinguish who's playing what.
_________________

"It is a metaphysical truth that all nature would begin to lament if it were endowed with language."

"Speechlessness: that is the great sorrow of nature."

"...even where there is only a rustling of plants, in it there is always a lament."

"Because she is mute, nature mourns... the sadness of nature makes her mute."

"The language of nature is comparable to a secret password that each sentry passes to the next in his own language, but the meaning of the password is the sentry's language itself."

Bandcamp Daily  your guide to the world of Bandcamp

Quelle Chris joins the show to discuss his most recent release, "DEATHFAME"